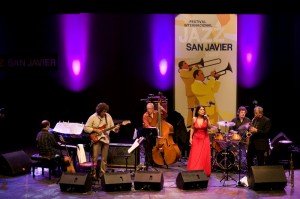 Well we were a bit more savvy in 2009 and called up and ordered an abonos. This is like a season ticket and gets you into the vast majority of the gigs at a reduced price. You buy the abono and get seats assigned, where you sit for each gig. There are usually a couple of gigs that cost extra. The biggest benefit for us queuing-obsessed Brits is that we get to jump the queue. We also didn’t have to fight for the best seats, which means we didn’t have to turn up 2 hours before the gig started! Some people are incredibly organised, bringing cushions (the seats are a bit “firm”), sarnies, binoculars and cameras. You don’t need the sarnies, because there are nice snacks available at an OK price from the bar. Oh, did I mention the bar? There’s a bar. Enjoy. You don’t really need the binoculars either, unless you want to get a close up on those flaming fingers, as most seats get a good view (especially if you have an abono).

If you’ve listened to any Spanish radio over the last few years you will have heard Sole, she’s a legend in Murcia. Born in France, she moved to Yecla (Murcia) and as a child was a choir girl, later forming a folk group, before moving to Valencia. She’s worked with many great artists, including Randy Crawford and played Ronnie Scott’s in London (remember Ronnies?) 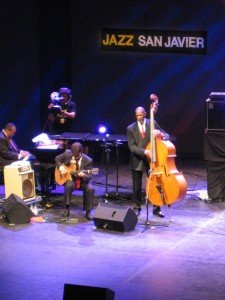 I think this guy is in the Guinness Book of Records for the longest fingers in the world (or is that just my imagination) – he really does have very long fingers. Which is probably handy (groan!) for playing the bass. He’s also probably the world’s most recorded jazz bassist, has been playing for more than 45 years with greats such as Miles Davis & James Brown. 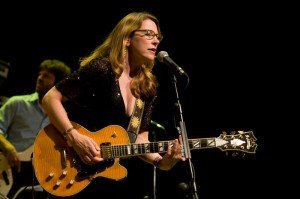 She looks like a librarian and sings like a rock star. A real change of pace, superb vocals and brilliant guitar, she mixes blues, soul and a little rock for a distinctive sound.

My favourite gig of the festival, the energy was contagious, his band was brilliant, his guests rocked. Mauri is Spanish, so the auditorium was packed. He plays a mixture of blues, funk, jazz and soul and he’s also the main man on the Hammond Organ. From the first song to the last medley he had the audience hooked. 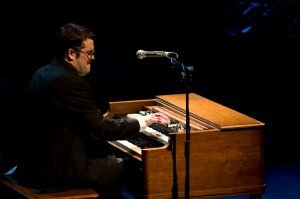 So what’s coming this year at the 13th San Javier Jazz Festival? Well, even though the crisis has reduced their plans a little, the line up is great. We’ve got George Benson, Chris Isaak, Dr. John, Dianne Reeves, Paul Carrack, Canned Heat and Chucho Valdés and loads of others – take a look here for the full line up.

We order our tickets by telephone and pick them up on the night. Tickets were still available for sale at the venue at 8pm on the night of most concerts last year. Prices range for 12€ to 30€, or buy the abono for 100€ (plus extra for 2 concerts).

The venue is great too, I’ll be looking out for other interesting gigs here in San Javier at Auditorio Parque Almansa. There’s a bar, park for the kids and plenty of parking.

For more info on the San Javier Jazz festival and other gigs have a look at this great music site from Tony Poole, he has loads of links to video and audio clips, great descriptions of the artists and finds out about gigs quickly. Well worth subscribing to his blog. There’s also a facebook fan page.

Let me know if you’ll be going, we can have a drink!