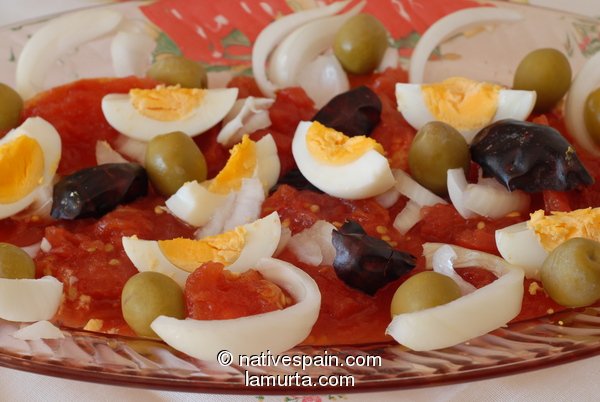 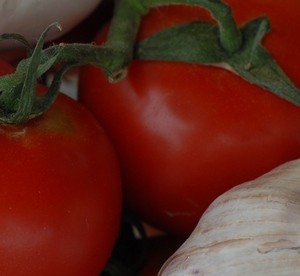 Tomatoes are just one of the many things the region of Murcia is famous for (along with golf courses, unused airports and La Manga). Our market garden – la huerta – provides Europe with an excellent array of salad, vegetables and fruit throughout the year. There are plenty of Spanish recipes with tomatoes, but this one is special to Murcia – the Murcia Salad.

When I have a glut of tomatoes in the garden I make this recipe with fresh tomatoes, chopped up really small. I don’t bother peeling them, but if you prefer you can. This recipe calls for a tin of tomatoes to save you time and for those of you without a plentiful supply of fresh produce.

Once prepared it keeps well in an airtight container in the fridge for a few days. The Murcia recipe uses cebolla tierna, which around here are almost sweet to taste. A Spanish onion or normal cooking onion works well, chop it finely.

Cod (bacalao) is the most consumed white fish in Spain. It has beneficial nutritional properties and great versatility in the kitchen. Cod is bought and consumed fresh, frozen, smoked or salted (dried then salted); the latter being the most traditional and widespread. In the supermarkets in Spain you can buy small packets of bacalao bits ready to add to your salad. If you can’t get the bacalao then a tin of tuna will work well or try smoked fish broken into pieces.

You really do need to serve this recipe with plenty of homemade or fresh Spanish bread – the flavours of the oil are too good to waste.

This dish is often served as a tapas or as a starter in Murcia. This version of the recipe was provided by Antonia Noguera Rojo from La Murta. 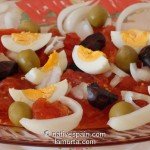 Spanish Village Cooking – Recetas del Campo… Over 150 simple, family recipes from a rural village in Spain… Enjoy over 150 simple, family recipes from a small village in Murcia. These recipes have been handed down through generations, grandmother to mother to daughter, making use of local, homegrown ingredients and traditional cooking methods. The chefs of La Murta generously share their secrets, so you can enjoy fresh, Spanish food from the heart of the Sierra del Carrascoy.

This book is in English & Spanish, in Print & in Kindle editions.

Get the book from the Fiesta Committee in La Murta or from Amazon from www.NativeSpain.com