The Game of Caliche 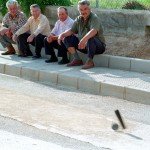 Old gents watching the game of caliche in La Murta

The game of caliche is particular to the Murcia / Levante region of Spain, based on a nationally-played game called herrón. If you, as we did, look up caliche in the English-Spanish dictionary (after seeing it in the itinerary for the local fiesta), you might be confused or even horrified. Caliche (in our 4 inch thick Collins mega-dictionary) means ‘saltpetre’, or echar un caliche means something really quite surprising, and I’m not going to reproduce the translation here (we were getting prepared to watch from a distance!).

Caliche is a game rather like skittles in Britain. ‘Rather’ as in very loosely indeed. It is played on a flat surface (say, the road outside your local teleclub) that is 35m long and 6m wide. A wooden baton (called the caliche), 20cm long and 3cm diameter is placed 7m from the end of the field. A 2cm disk (moneda) is placed on top of the baton. The end of the field is blocked off with a stout table or similar, turned on its side to stop the moneo disks which you throw at the baton. A moneo is a weighty metal disk of 8cm diameter (could be square, too) and about 2mm thick.

The objective of the game is to throw the moneo at the caliche in such a way as the moneda and moneo end up as close as possible to each other (after displacing the moneo from the caliche.)

The game is usually played with two teams of two. Each game has 8 throws, 4 per team and 2 per player. For a throw to be considered valid, the moneda must end up closer to the moneo than the caliche. If the moneo ends up nearer the caliche, the throw was invalid and is called a ‘ganga’.

A ganga throw can also be considered valid (made into a ganga válida) in the following way. You can throw another moneo down the field with a view to getting that one to land closer to the moneda than the caliche, or throwing another moneo in order to move the caliche so that the moneo you threw initially is now closer to the moneda than the caliche. If the player manages to achieve one of these ‘validation moves’, the throw is said to be arrimar or arrestar. 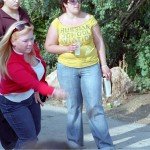 If, after throwing the second moneo after a ganga throw, you still don’t have a valid throw, there is one last option to validate your throw. The caliche and moneda get put back in their place in the centre line of the field and 7m from the end board. Once set up, the team that throws first has up to 4 opportunities to overturn the caliche and make a ganga. If so, the team that throws second will have to make a ganga válida to gain a point.

The teams take turns to play first. Typically a match comprises 12 or 20 rounds (manos). A point is gained by each the team winning the mano.

Now after all that explanation of the complicated rules, that’s not how we play it in La Murta. We just line up and throw 9 discs at the pin and count how many times we knock it over. When the last person has thrown, if there’s time and enthusiasm we all start again, adding our new score to the last one. Much easier, even an extranjero can work it out!