Day Out In Águilas & Diving With Dolphins 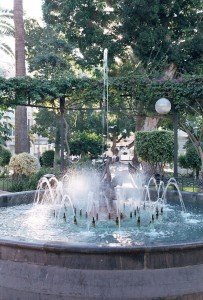 We’ve been to the port town of Águilas (you pronounce it with the stress on the very first A) a couple of times over the last few years and we’ve always had a wonderful time. Our most recent visits included a spot of diving, some really great food and seeing a dolphin. I’ll tell you more.

We had a week off work and thought a couple of days diving would be fun. We chose http://www.buceoaguilas.com/ right on the harbour, next to the train monument.

Diving around the Cabo Cope area you’ll find wooden fishing boats sunk to provide an artificial reef, in conditions that are usually calm and clear with good visibility. You’ll see damsel fish, grouper and many moray eels, in fact huge moray eels, probably bigger than me! We also saw barracudas nipping about in the gloom.

We also did a cave dive at La Cueva de la Virgin where a shrine has been built with an image of Mary and her child. It’s not exactly a cave, more a short tunnel, where good buoyancy control is essential.

We had lunch on both days at the very difficult to find your way into Restaurant called Casa del Mar right in the port on Explanada Del Muelle. It’s the restaurant that’s upstairs with an awning and a great view of the port, but to find the entrance takes a bit of detective work and a confident walk into what looks like a social security building. It’s worth finding though. You can park right outside.

We were advised by our dive master to order the specials, Arroz a banda and Calamari, which we dutifully did, and were very glad for the recommendation. A whole calamari was lightly battered and deep-fried, then brought to our table and sliced for us to share. It was superbly succulent and just right as a starter for two. The Arroz a banda is more known as a Valencian dish and is rice with fish (and stuff), and again was yummy, but a little too much for us to finish.

On our final day of diving, on the boat on the way back to the port, we saw a dolphin. Our dive master said that only a few years ago he would routinely see 6 or 8 dolphins on every trip, but this is the first he’s seen this year. I think that dolphins are like stars, the first to spot one gets to name it. I name that dolphin Flipper. Unique, original, apt, inspired! If you see flipper tell him I said hello! 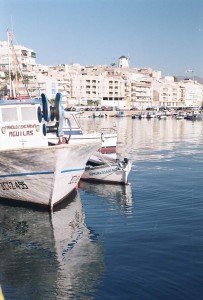 Águilas is right down on the coast in the South West of the region. The castle of San Juan has been reformed and is open to the public. It was built to ward off pirate attacks. It’s worth visiting the garden at Plaza de España which is full of a collection of rare plants and shrubs, rubber plants and palms and elderly men whiling away a few hours. There’s the 19th century Ayuntamiento and the parish church of San Jose where the effigy of the patron saint is kept. The town’s food market and the railway monument are other places of interest.

Tranquil beaches with fine sand, huge cliffs and beautiful coves can be found at San Pedro, Blanca and Los Hierros. Los Hierros is dominated by the tower named Torre De Cope, which has been attacked on numerous occasions by pirates. Close by are the beach at Calabardina and the natural park of Calnegre–Cabo Cope.

Some good websites about Águilas:

Take a trip out to Águilas and let me know what you find and enjoy.