There’s only one thing worse than not being able to speak the language when you live in a foreign country, and that’s speaking it badly! I have an affliction that I think many language students have at some point: using the wrong word at inappropriate times. If I’m honest I have this affliction in English too. Blurting out the first thing that comes into my head, without censor, has gotten me into some funny scrapes.

Recently we were at our local Spanish village fiesta and were happy to be invited to eat lunch with some neighbours. When we got there our fellow guests included the choir and the vicar. I understand some people have a reasonable fear of spiders, snakes or clowns (!), but my personal fear is of men dressed in frocks who think they hear the voice of god, like to eat his body and drink his blood.

The vicar smiled and waved me over: “Come and sit here, right next to me,” and he patted the ratty bench. I looked behind me hoping he was talking to someone else, but no, he was beckoning me. Now don’t get me wrong, he’s a lovely man, smiley, friendly and about a foot shorter than I am, and I’m sure I’d win in an arm wrestling contest. But, my interest in religion is minimal and my irrational fear of vicars is huge.

I slowly walked towards him, hoping my husband would see my predicament and come to assist me. No  such luck, I was on my own.

“You have beautiful hair. It’s so light and luminous. You look like an angel,” was his opening gambit. Smooth talker or what?

One of my tricks to learn Spanish is to copy what other people are saying and repeat it back. For example if a Spanish friend says, “Would you like some ham?” instead of just saying, “Yes please,” I would say, “Yes please, I would like some ham.”

This technique has caused me loads of trouble in the past. Especially as I think all the scuba diving has blocked up my ears and I quite often hear the wrong thing. For example, the words for scared (miedo) and shit (mierda) sound remarkably similar to me. Telling our horse riding instructor that my fellow Brit riding companion is shit didn’t really help her confidence!

I also have an insatiable urge to say the wrong thing at inappropriate times – take for example some years ago in a previous life when I was on stage in front of 100 or so insurance salesmen (99% of them were men), explaining the virtues of the internet, when I froze and forgot what I was saying. After an interminably long pause I blurted out, “You can buy breast implants on the internet!” Well, it got their attention.

So, my little vicar is smiling beatifically up at me, waiting for my grateful response, and I reply in Spanish: “You have beautiful hair too, it’s very gray. You look like a monk.” I thought that given the circumstances he’d be very happy with my response, surely any vicar would love to look like a monk? And if he’s calling me an angel, then a biblical response is required. No?

However, he pursed his lips like I’d pee-d in his wine and slid along the bench in the opposite direction. I’d obviously said the wrong thing, again. Later, after a frosty lunch I asked my husband what I’d done wrong. I was indignant that I hadn’t meant to offend him. It transpired that instead of calling him a monk (monje) I had inadvertently called him a monkey (mono).

Now even I know there aren’t any monkeys in the Catholic Church, there’s the holy goat of course, but monkeys? That would be stupid!

There’s only one thing worse than not being able to speak the language when you live in a foreign country, and that’s speaking it badly! I have an affliction that I think many language students have at some point: using the wrong word at inappropriate times. If I’m honest I have this affliction in English too. Blurting out the first thing that comes into my head, without censor, has gotten me into some funny scrapes. 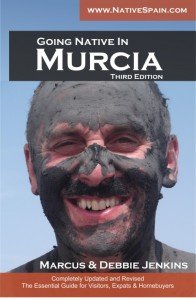