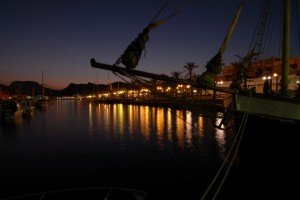 Cartagena Port - great for a stroll

Cartagena is a medium-sized town on the south-east coast of Spain, dominated by an industrial port and an illustrious naval history: the inventor of the submarine was from Cartagena, as commemorated by the huge grey prototype submarine from 1888 that squats down by the leisure port. The largest submarine in the world is also being built here, under wraps so nothing to see unfortunately.

Being the second largest city in the region of Murcia you would think Cartagena would still have the big metropolitan feel of Murcia, but it’s a refreshingly wide open and low slung place with a beautiful and busy port area. We had ice cream at the leisure port, overlooking the natural harbour formed by the mountains, which is full of bars and restaurants (which serve as cafes by day and clubs by night). We also visited the city’s air raid shelter (it was a key strategic town during Spain’s civil war) and museum, which was fascinating.

If you have a car you’ll be able to drive to many fortresses, castles, fortifications and battlements, ranging from Roman construction through to abandoned 20th century projects. Cartagena’s military importance is charted by numerous installations including huge guns on the hilltops, submarine tunnels straight out of a James Bond film set and 16th century pirate look out towers. 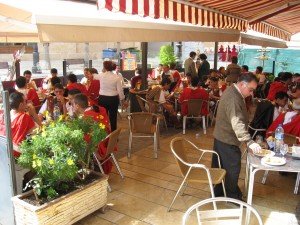 The Romans having a spot of lunch 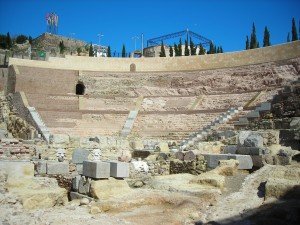 Ampitheatre - mid-cosntruction - it's finished now and is spectacular

Cartagena has a long history of Roman occupation and battles. The reason the Romans wanted Cartagena was because they were amazed at how quickly Carthage, its north African rival, managed to pay off punitive damages imposed by Rome after the First Punic War. There was enormous mineral wealth in the hills surrounding the natural harbour which the Carthaginians discovered and swiftly colonised it (hence its name, from the Latin for New Carthage). The remnants of the mining works can be seen all around (and under the water!) 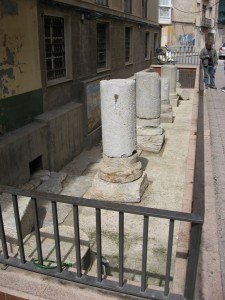 Roman pillars (a clue to the multipart geocache)

We also visited Cartagena last year with our nephews and placed a multi-part geocache. If you’re not sure about geocaching take a look here: https://nativespain.com/murcia-region/geocaching-fun-for-kids-big-kids-and-gadget-freaks/ for some more information. This geocache is an excellent way to get to know the city and see some of the highlights. If you want to have a look at this cache, go to www.geocaching.com and search for “fuertenavidad” from user “marcusj” – I promise you it will be a fun day out with your family.

As you’ll have noticed by now, if we’re visiting a place near the sea, we’ll probably be diving there! And Cartagena was no different. We dived with a lovely club called Hesperides – http://hesperides.biz/ based in the port. Our first dive included two sunken boats and a Harrier Jump Jet fuselage. We also dived around the Island of Escombreras and have more dives coming up! They speak some English, are easy to reach and during the summer one of the better dive clubs as there’s parking nearby!

And of course no trip is complete without some food. Now I hesitate to tell you about Techo Bajos because some restaurants I like to keep to myself! But I would feel bad if I didn’t let you in on the best restaurant in Cartagena. It’s rough and ready, with fast turnover and quick food. The prices are great, the menu del día is super value, the ambience is fun, and all our Spanish neighbours in La Murta highly recommend it! One word of warning – it’s a fish restaurant – they sell fish, shellfish and more fish! Go on a weekday and get the menu del día you won’t regret it. Techos Bajos – Paseo del muelle s/n – 968 505 020 – it’s out of the city in the small town of Santa Lucía. 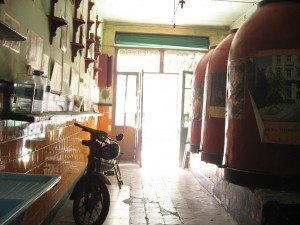 Let me know how you get on in Cartagena and your favourite places.
Speak soon, places to go fishes to meet
Debs