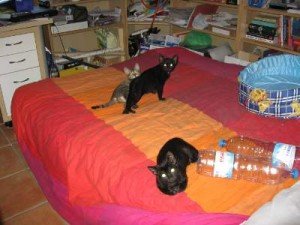 The feral kittens are still a little wild. Two of them will tolerate me touching them accidentally, wait by their bowls for the food and clamber over my lap to play. The third little black one, the only girl, is still very timid and won’t let me touch her, though she will touch me if I stay still.

They are all eating and have put on plenty of weight. The tiger is fluffy and his fur looks great. The black ones are still a little threadbare, but fluffing up nicely.

They play enthusiastically together, sleep on the bed and eat while I’m in the room. They can get a little spooked if I move too quickly or noisily. They have systematically removed things from the bed and shelves and pulled them under the bed, including (but not limited to!): 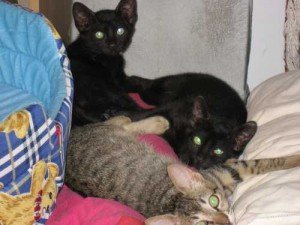 Three kittens lying BY their very expensive (not!) cat bed

They refuse to lie in the dog bed thing I bought them, lying right next to it in a huddle instead.

We’ve allowed them access to the whole house a couple of times a day for the last few days. They have ventured further each time, slinking into the other rooms and checking out hiding places.

We’ve tried to make introductions to our big cats, but this is proving difficult. Our baby cat (Catalina) is being most accommodating with only a hiss and low growl, followed by demands from me for cuddles. The big cat (Randy) is petrified of them. He growls, hisses, fluffs up his fur, turns his tail into a feather duster and does a runner out the cat flap! Any tips or tricks would be useful from those of you who’ve had this pleasure before!

Hawkeye - naughty, cheeky boy - purrs when I touch him 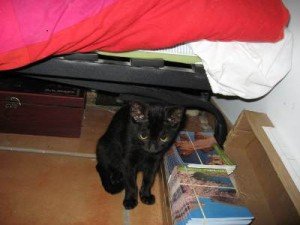 Hotlips - shy, the only girl - prefers living under the bed 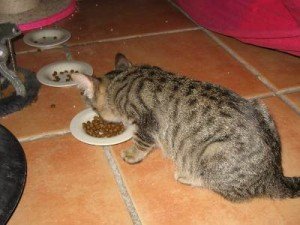 BJ - brave and adventurous - first out of the room 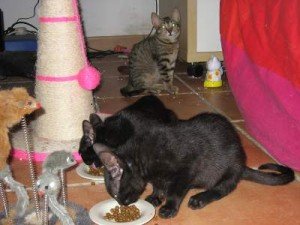 Yummy food, but BJ prefers the Hello Kitty - photo taken just before Hello Kitty was cathandled under the bed