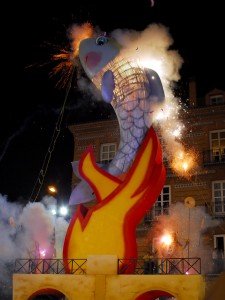 On the Saturday after Easter we bury a Sardine!

For hours before the parade begins families strategically leave elderly relatives in prime locations along the route to secure a good view. Seats can be booked for front row entertainment, or you can wander around to find a quiet corner. Kids play around the thousands of precisely aligned chairs, leaving them slightly askew, before an officious passerby regains order. Everyone is happy, smiling and looking forward to seeing the “Big Heads”.

El Entierro de la Sardina is an unusual fiesta which takes place on the Saturday after Easter Sunday. Together with the Bando de la Huerta it is the big Murcian fiesta. The Entierro is the victory of Don Carnal over Doña Lent. A pagan festival with its origins in mythology and fire, an unmissable night for any visitor to the city. 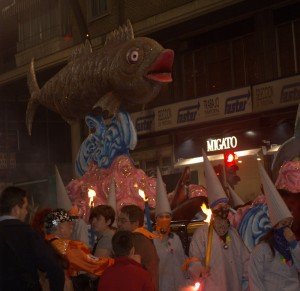 The origin of the Entierro de la Sardina goes back to the mid 19th century when a group of students from Madrid, who used to get together in the storeroom of the San Anton pharmacy, decided to form a funeral procession presided over by a sardine, to revive the carnavalesque festival held in Madrid on Ash Wednesday. The sardine symbolises fasting and abstinence,.

The festival is organised by the Grupos Sardineros, who stir the city into excitement with their parades in the days leading up to the event. In particular Saturday morning on the Boulevard Alfonso X el Sabio, where a widely attended and informal parade takes place.

The night before the parade Doña Sardina, represented by a woman, usually a journalist chosen by the Sardineros, reads the Last Will and Testament of the Sardine from the balcony of the town hall, making humorous references to public events and characters.

The parade is made up of two different parts: The start has brass bands, dancers, all kinds of musical groups, a Chinese style dragon, people on stilts, giants and people wearing huge heads (cabezudos). The second part is made up of floats adorned with Greek motifs and dedicated to the Olympian Gods, which accompany the Sardine until it is burned next to the Town Hall. Thousands of toys of all shapes and sizes are given out from the floats, the most notable being the overused whistle!

Fireworks, music, brass bands, dancers (semi-naked!), floats, toys, carnival groups, hachoneros (people who guard the floats), a concert of whistles… All of these come together in a night of madness, when everybody, without exception, fights for any toy thrown from the passing Sardineros. Watch out for balls, swords, dolls, dart boards, sweeties, board games, more balls, pop-guns, whistles and anything else completely useless!

You don’t have to wait all year to see a sardine, there’s a giant sardine permanently in the river (Rio Segura), take some photographs!

For more information have a look on www.fiestasdemurcia.es