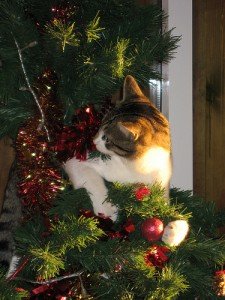 Cat up a Christmas Tree

We’ve spent 6 Christmases in Spain now and each year it gets better. And whilst I’m sure you’re just about getting over your over-indulgences and probably thinking about summer fun already, I wanted to take a moment to reflect on the season of goodwill.

We’ve been welcomed with open arms into our Spanish village and adopted by a Spanish family, so our Christmases are as Spanish as you can imagine.

From the Christmas Eve shindig in the garage of our adopted family, with a 6-course meal for 30 people, drinks (lots of drinks), singing (well, shouting), guitars and cigars (only the men of course!) to the quieter family lunch on Reyes day, with a 6-course meal for 30 people, drinks (more drinks!), singing (slightly more tuneful than Christmas Eve), guitars and cigars. Plus the 4 parties in between and of course the 3 King’s Procession through the village, the bouncy castle for the kids, the 12 grapes on New Year’s Eve, dare I go on! The Spanish Christmas period is not for the feint hearted. 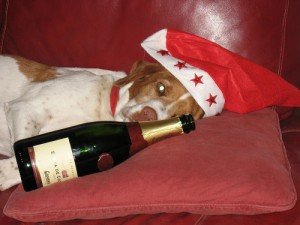 This year we again reciprocated by holding a lunch of our own during the festive period, where I dutifully prepared too much food, chilled too much wine and drank too much gin. I was ably assisted in making the paella by one of the wives of our adopted family. Being a foreigner of course I was unable to cook, my recipe was unneeded and the ingredients were wrong. I was relegated to “yes chef!” status and fetched and carried whilst this diminutive Spaniard cooked rice for 30 people.

A custom when being invited to a Spanish home for food is to take something to eat with you. Usually something sweet. So this year we excelled. We made mince pies, with our home-made mince meat. I cooked and decorated a Christmas cake. All of them were greeted with a little suspicion, a sniff and then scoffed!

We also baked the Murcian Christmas specialty of Cordiales. These are the delicious little almond cakes, with angels’ hair filling. 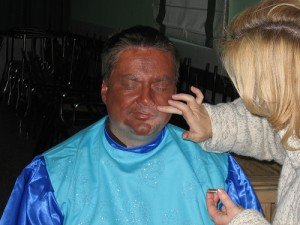 Marcus being prepared for his starring role

But the highlight of the season for me last year was seeing my husband dressed up as a King. He was chosen (much in the way when the army asks for volunteers and 19 recruits step backwards, leaving 1 remaining “volunteer”) to be a King at the Reyes day procession.

Whilst I had seen and read about the procession, it’s only when you’re involved that you realise how much thought and attention goes into it all. From the costumes, the gifts and the roscón (large doughnut shaped cakes), every detail is planned, and all the children get a gift from the Kings. What surprised me most was that the Kings also visited the elderly and sick in the village, sharing happiness and good wishes with all people. 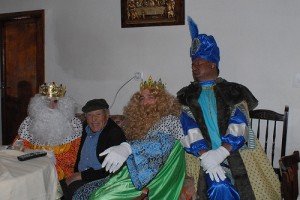 The Three Kings of La Murta

Whilst I’m not a religious person (and the 1 hour mass was a little tiring!), I think that this event totally summed up the “meaning” of Christmas. It’s not about the cakes and the food, nor the booze and the cigars. It’s about being with people who care and whom you care about. It’s about taking the time from busy lives to celebrate the young, appreciate your peers and honour the elderly. The Spanish really do take having fun seriously.