The region of Murcia has a host of activities to while away a sunny afternoon or keep you busy for a week or two. Here are five of our favourite ones. 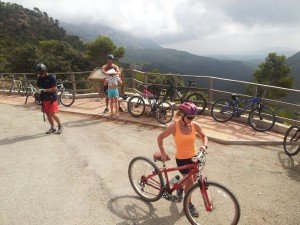 The idea of cycling UP the Sierra Espuña never really appealed to my lazy bottom, however, freewheeling all the way down? That’s a different matter. With food at the end? Great, count me in!

An early start at the lovely hotel in Gebas in the Sierra Espuña, the guys were loading the trailer with bikes and spare kit, everyone piled into the vehicles and 3/4 of an hour later we were at the summit, ready for the descent. Even in August it’s cold at the top of the Sierra Espuña, I was shivering and ready to get started. You can see in the photo that we were above the clouds, which cleared up pretty quickly as we descended.

The downhill sections were mainly on tarmacked road and off-road trails, which are clearly signed and well maintained. The road sections are a little hair-raising if you’re a wuss like me. The roads twist and wind, with views far off into the valleys below. There is very little traffic up in the mountains, but take care, and of course wear a safety helmet. As you near lunchtime the track levels out and then you have to work a bit harder for your lunch, with the last half an our on an uphill road ride back to the hotel.

It’s a great activity for the whole family, as long as you’re all quite confident cycling on roads. It’s great value, and the lunch was welcome (as was the glass of wine).

We went with the guys from The Espuña Adventure, who run the Mariposa Hotel which is where lunch was served. Bob Shoesmith was our guide and was knowledgeable and made sure everyone was safe and didn’t get lost or left behind. I think I won the award for the slowest downhill bike ride ever! At regular points Mark Langton would meet up with us to make sure everyone was OK, and give people an opportunity to stop and go back to the hotel if they wanted to.

When: All year round. They put dates on their website, but get in touch to find out when the next one is planned. They also do kayaking, quad biking and walking tours.

Where: Gebas, Sierra Espuña Natural Park in Murcia, get a free map for your Android.

How Much: Price is €35 and includes lunch at the hotel. 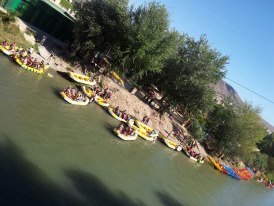 Some people might think that there’s not a lot of water in the rivers of Murcia, but they’d be (a  bit) wrong. The Segura river north of the city of Murcia is fairly full, flowing and surprisingly clean. We started off in the lovely town of Blanca, at the riverside, where we parked early on a Sunday morning in September and were shocked to find hundreds (really!) of people wandering around waiting to be taken to the departure point further up river. There are at least three centres that use Blanca to collect the wannabee kayakers and rafters, so make sure you know which group you’re with.

Predictably the six large coaches (really!) were late in departing, but everyone was in great spirits, racing from coach to coach, swapping seats, quickly rushing back to their cars, changing their clothes (again), having another quick fag before being herded onto the coaches for departure. I’ve always loved the phrase “herding cats” and the images it brings to mind. The guys at Murcia Aventura are aces at herding Spanish Cats – an altogether more difficult proposition than herding the orderly British queuing cats. Finally we arrived near the quayside and the organiser warned us to stay together and not get mixed up with the other groups – I thought he was going to tell us to hold hands and walk in pairs.

After waiting for a few other groups to set off, we got our life jackets and helmets and were ushered into the kayaks. A few minutes later and our group of six rafts and 5 kayaks were off. Each raft has a captain who knows what he’s doing, the rest of you just splash around a bit and get wet. It’s not terribly energetic, the most energy used is in splashing the other rafts with as much force as you can muster, shouting and jeering. You do get very wet though, and stay wet the whole day. We were lucky with a wonderfully hot day. At about two-ish we pulled the rafts into the riverside for lunch. A tent had been set up and pans of paella were brought over from the local restaurant. There wasn’t anywhere to sit, but there was cold beer and hot paella and a break from bouncing around on the rubber dinghy.

The most exciting points were two weirs – the first was quite small but still sent a huge ripple of excitement through the group. The second, just after lunch, was considerably larger and much more fun. Some people body surfed down the weir too.

It’s very much a group thing – we were the only “pair”, all others were in gangs, some quite large. There were some families taking part, with children as young as five. I think we were the oldest and the only foreigners!

When: All year round, but I think it’s probably more sensible to do this in the summer months as you get wet! They put details on their facebook page, but it’s best to send them an email with the size of your group and preferred dates.

Where: Starting point is the town of Blanca.

How Much: Just €25  including transfer to the quayside and lunch.

In Part 2 we have a look at horse riding, scuba diving and hiking.