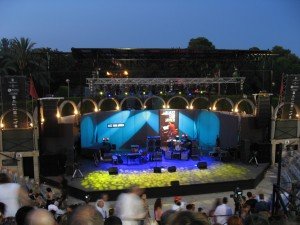 We’ve lived in Spain for 5 years now, and up till 2008 had managed to miss the San Javier jazz festival entirely – probably due to the local newspaper’s crazy plan of telling you what happened yesterday (and how great it was) rather than what’s happening next week, or even tomorrow! So 2008 was our first festival, we bought season tickets in 2009 and have just bought our tickets for 2010.

Read on to hear my reviews of previous years, and find out what’s coming for 2010…

Wow. What more can I say? The festival was super cool, well organised and had some outstanding artists. The most important figures in the world of jazz, blues and bossa nova had an appointment at the XI San Javier International Jazz Festival – well that’s what the website said anyway. www.jazzsanjavier.com detailed all of the artists showing at this year’s extravaganza. Keep an eye on this site to see who’s coming each year.

We saw only two gigs (I can’t believe we were so rubbish as to only make it to two!), which included 3 artists and loved them all. 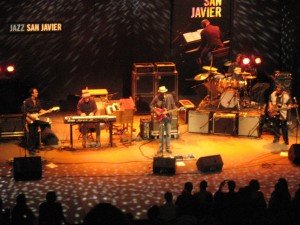 He was great. I admit I’d never heard of him till that night but I’ve now ordered 4 of his discs from the great Amazon music god. One of the love songs was entitled “You Don’t Have To Shave Yo’ Legs”, the chorus goes:

“Go ahead be wild and free,

You don’t have to shave yo’ legs for me”

Women everywhere, revolt. If your man really loves you, then your furry legs won’t make a difference, Keb’ Mo’ says so! 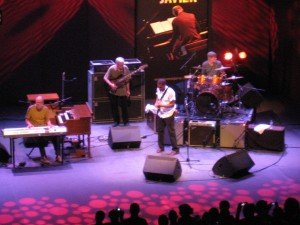 I’ve been a fan of Robert Cray since I was a kid. I get the lyrics of Strong Persuader stuck in my head for days at a time, much to the annoyance of everyone around me as my out of tune rendition bears no resemblance to the great man’s melody (and not much resemblance to singing).

Robert Cray was on great form after Keb’ Mo’ warmed the crowd up. He worked the crowd well and opened with a line: “I don’t want to send you all home tonight feeling sad and blue, but hey, that’s what we do!” And he went on to prove it with some of the sweetest lyrics, heart-rending vocals and not bad (understatement of the year!) guitar-strumming. 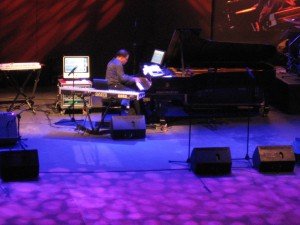 This was the last gig of the event – shame! Herbie was awarded some gifts from the mayoress of San Javier, something shiney in a box and a silver boat. He bantered with the audience in broken Spanish and they really appreciated it. He told us he’d been in the music business for 62 years. You could tell, he was outstanding.

Two superb female vocalists accompanied Herbie, oozing those Joni Mitchell lyrics from his new album River. They got the hairs on the back on my neck all aquiver.

Now this was real jazz, a bit funky, cool, mellow and a great big bit of discord thrown in. The range was extreme, the crowd loved him, the night was perfect.

Till tomorrow, when I’ll tell you what I thought of 2009 and what’s in store for 2010, from a hairy-legged Debs, still humming along to Strong Persuader.