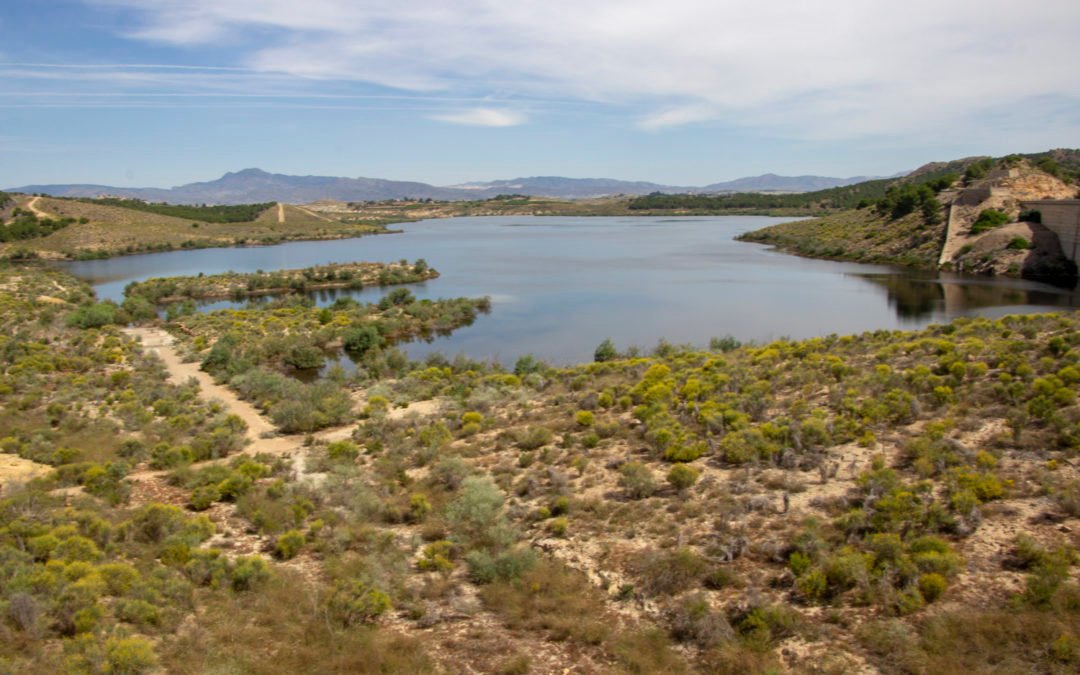 There are many places for walking in the Murcia region. An easy option with spectacular views is the reservoir known as the Embalse de Santomera, a few miles to the North East of Murcia city. The walk can easily be extended or shortened depending on your physical ability and your time requirements, and getting out into the natural environment is good for everyone. A trip here can also be combined with some other places of interest just a short drive away.

The Embalse de Santomera is located just a couple of miles from the A7 motorway not far from Murcia city. Look for the Fortuna junction and follow the RM-423 until you see the signposts for the reservoir. Don’t worry if you accidentally stray into the grounds of the Water Authority’s Casa del Agua. This curious building can be visited by prior arrangement if you wish to learn more about how water resources are managed. There are some interesting sculptures and information boards in the grounds too, as well as some great views of the water.

A small car park can be found close to the old hostel which still has its colourful mosaic detailing various aspects of the local environment. A map is handily displayed of the PR-MU82 walking route. Taking a photograph of it is a good idea so that you can keep track of where you are. It clearly illustrates the 6.5km round walk and also shows some other tracks which you can explore.

The walk begins with a small climb up to the reservoir’s dam. You could just take a stroll straight down and do a bit of birdwatching, but we followed the yellow and white waymarkers over the dam and into the hills. Along the there were beautiful views of the water and the countryside. If it’s getting a little bit hot in the afternoons a morning stroll is probably better in the summer, and remember to take sensible shoes, a hat, sunscreen and plenty of water with you.

The path is easy to follow and the uphill sections were not too steep or strenuous. Rather than follow the entire length of the route, we turned onto a track marked by a purple spot just after the TV mast. This cut about 20 minutes off the walk, but it wasn’t the easiest descent in places. Just remember to turn right when you rejoin the main path, even though your instincts tell you to go left!

A spot of lunch

You can take a picnic with you and eat it with a view of the reservoir if you wish. That does add extra weight though, and rather than eat at the side of the car park, it may be better to continue a little further along the road where a large open area complete with picnic tables and barbecues awaits. Take a beach umbrella for some shade though as there isn’t a lot of shelter from the sun.

Alternatively, make your way back to the main road and continue into the town of Fortuna. There we can highly recommend the Panaderia La Purisma with incredible cakes and pastries which, having just finished a strenuous walk, you can easily justify sampling!

A few kilometres further up the road are the thermal swimming pools of Balneario de Leana. Costing €12 during the week and €16 at weekends, they are the perfect place to cool down after a hard morning of walking. There are three hotels on site if you wish to stay over, and several options for eating. Just a wander around is nice though, as the buildings have been repainted nd resplendent against the cloudless blue sky. It feels almost like a Hollywood film set.

Not too far away you can visit the Olive Oil almazara of Ramón Pérez Monday to Friday, but be aware that they close from 14:00-16:00. A collection of exotic birds can be found at the entrance to the yard. Park up and walk through the door shaped like a bottle of olive oil and buy something tasty to take home. Don’t forget to go downstairs into their bodega where some lesser known local wines can be found. Of course, it’s always nice to chat to the staff, and they may even treat you to some tasting of their lemon infused oil which is out of this world. It’s a product which will be launched in October alongside their new cafe.